Cyber Security VC Funding: Is the Bubble About to Burst?

Cyber Security VC Funding: Is the Bubble About to Burst? 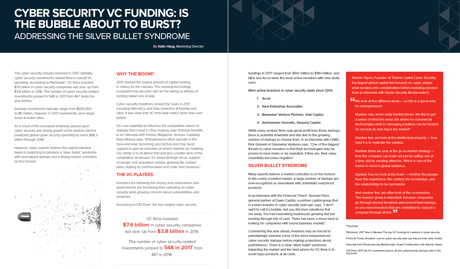 Average investments typically range from $500,000 to $5 million, however in 2017 investments were larger funds at faster rates.
As a result of the increased emphasis placed upon cyber security and strong growth of the market, Gartner predicted global cyber security spending to reach $96.3 billion through 2018.

However, many experts believe this unprecedented boom is beginning to produce a ‘silver bullet’ syndrome with overvalued startups and a strong market correction on the horizon.

WHY THE BOOM?
2017 marked the largest amount of capital funding in history for the industry. The evolving technology ecosystem has become ripe for the taking as billions of funding dollars are at play.
Cyber security headlines rocked the news in 2017, including WannaCry and data breaches at Equifax and Uber. It was clear that VC firms took notice more than ever before.

VCs see potential to influence the competitive nature of startups they invest in, thus reaping clear financial benefits. In an interview with InfoSec Magazine, Venture Capitalist Nazo Moosa says, “Entrepreneurs often operate in the here-and-now, becoming very tactical and may need support to gain an overview of where markets are heading. Our ability is to sit above that and give a better view of the competitive landscape. It’s about strategic focus, support of merger and acquisition activity, growing the contact base, helping to commercialize and scale their business.”

THE VC PLAYERS
Investors are following the money and corporations and governments are increasing their spending on cyber security amid growing concern about vulnerabilities and breaches.
According to CIO Dive*, the four largest cyber security fundings in 2017 ranged from $100 million to $180 million, and NEA and Accel were the most active investors with nine deals each.

While many venture firms reap great profit from these startups, there is potential downside and risk due to the growing number of startups to choose from. In an interview with CNBC, Rick Grinnell of Glasswing Ventures says, “One of the biggest threats to cyber investors is that their technologies may be proven to have holes or be exploited. If they are, their value essentially becomes negative.”

SILVER BULLET SYNDROME
Many experts believe a market correction is on the horizon in this overly crowded market. A large number of startups are now recognized as overvalued with potentially overpriced products.
In an interview with the Financial Times*, Norman Fiore, general partner at Dawn Capital, a venture capital group that is a keen investor in cyber security start-ups, says, “I don’t want to call it a bubble, but you did have valuations that ran away. You had lossmaking businesses growing fast but burning through lots of cash. There has been a move back to looking for companies with sound business models.”

Considering the year ahead, investors may be forced to painstakingly examine some of the more inexperienced cyber security startups before making projections about performance. There is a clear ‘silver bullet’ syndrome impacting the market and the best advice for VC firms is to avoid hype products at all costs.